UFC Live on Versus Results - Cheick Kongo Comeback TKO Best of all Time? 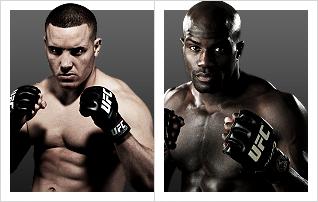 After a Big comeback win, where does Cheick Kongo in Heavyweight division?

Cheick Kongo's come-from-behind knockout of Pat Barry was already being mentioned as a potential "greatest of all time" candidate when UFC Live 4 went off the air on Sunday night. Certainly, Kongo rebounding from sure disaster to knock Barry cold (eyes wide open, that was simply creepy needs to rank as one of the greatest comeback performances within the company's history.

It is always dangerous to talk about superlatives, but in terms of "performance biggest comeback in UFC history" I think Kongo feat ranks right up staggering KO of Pete Sell vs Scott Smith in the "TUF 4" final and Matt Hughes fighting back from an out place low blow to retain his welterweight title against Frank Trigg at UFC 52. As for the rising of Kongo in the heavyweight division? That's not so clear. Bet on UFC 132 Right Here..

The French striker has now sandwiched a pair of wins around his draw with Travis Browne at UFC 120 and the wave of publicity he's sure to ride in the wake of this performance could go a long way to distancing him from a reputation as a fighter with an uncanny knack for low blows. In terms of becoming a true contender though, he's still got a ways to go. A rematch with Browne could make sense, since the draw resulted when Kongo lost a point for hanging onto his opponent's shorts. If the UFC wants to give him a good chance to get rolling, it could also book him against the winner of Ben Rothwell vs. Mark Hunt from UFC 135. UFC Live on Versus Results - Cheick Kongo Comeback TKO Best of all Time.