Hollywood Park Horse Racing Picks & Odds November 11th 2010 - RACE 1.  MINUTESANDTOUCHES (1) Horse Racing Odds 9/5 makes a huge class drop today, and this gray gelding was pretty close in a couple of stakes races as well including a GR 3 race at this track back in July. Off of the route this one will have a ton of late kick, and we expect him to pass them all as they trip the wire today.  CALL ME LATER (2) has lost two heartbreakers in a row, and though his recent pp’s are better, we still abide by our class concept with our number one pick. This one however still should be in the hunt and close by today.  MISS LONG GONE (3) showed speed at this level in his last race, and the handler switches things up with PVAL today. Food for thought. Horse Racing Picks 1-2-3 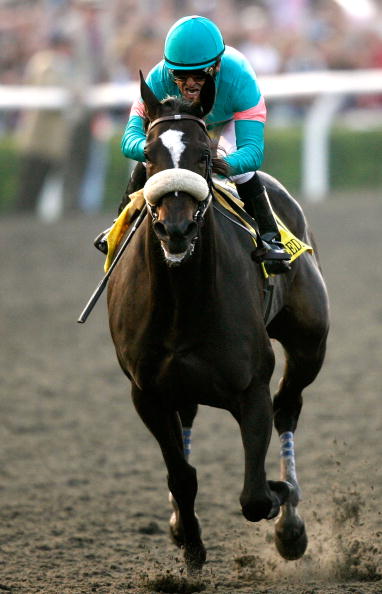 RACE 3. WILD HOMBRE (4) Horse Racing Odds 5-1 flopped as the chalk in that last race, though he did have some trouble that day. This guy had a solid debut, and we expect him to make amends for that last race today. LOGICAL HABIT (5) Horse Racing Odds 3-1 had an ok debut, but our concern is the amount of races that Paul wins on an annual basis, 15 thus far. Still many of these are questionable, and with a repeat performance this one logically would be in the hunt in this race. RESPLENDENTLY (3) was just three back in a recent Mdspwt race, though this one has really had far too many chances thus far. Still this is a big class drop, and part does not seem impossible for this Bell runner. Horse Racing Predictions 4-5-3.

RACE 4. LUV DRAGON (2) is proven on the route races, and this one just missed in an 18k claiming race in that last trip over the 7 ½ panel course.  This rider is really starting to come around these days, and we love this garden post position as well. All systems appear to say go today. PLANTSITE (1) draws the rail on the route, and this is quite a class drop as well. We would not be shocked to see Martin gun this guy from the fence and try to steal this one, and it may work in this race. MIILTY WAY (5) gets Joel back in the saddle today, and the last time he rode this guy he won with the greatest of ease. Expect the big wake up call today. Horse Racing Picks 2-1-5

RACE 7.  CARACORTADO (1) may actually need this race to show his best stuff, but it is pretty hard to ignore those races such as the PREAKNESS and the SA DERBY. From the rail on a sprint this one may not get going in time, but he is still by a mile the classiest runner in this race, and due to that we will bite, but we are advising to approach with caution on this one. STONESIDE (9) has a touch of class, and this guy has amassed 425k in purse earnings as well. We would not be ignoring this guy in this race. DANCE WITH GABLE (4) is probably in the best form right now out of all of these, but the others have simply run with tougher stock than this guy. However with Rafael up anything is possible. Horse Racing Predictions 1-9-4.