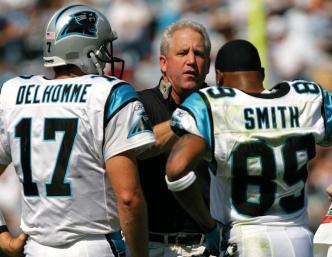 The Panthers are coming of a NFL Predictions loss to Tampa Bay last week, 20-7, the Panthers struggled to move the ball and committed turnovers, a bad combination. Matt Moore has not played well at quarterback and has been replaced by rookie Jimmy Clausen from Notre Dame. Clausen wasn’t lights out either in his limited time playing with a 13-point deficit but the Panthers need a spark on offense. Carolina still has weapons for their rookie quarterback. Jonathan Stewart and DeAngelo Williams need to lift-up the running game as both 1,000-yard rushers from a year ago have not put-up good numbers so far in 2010. Steve Smith is also still out there as a wide receiver and he could play a key role helping the young quarterback get adjusted to the speed of the NFL game.

The Bengals toughed out a 15-10 NFL Predictions victory in a defensive struggle against the Baltimore Ravens in a game in which Carson Palmer and the offense struggled to get points. They could get healthy against the Panthers defense that allowed Tampa Bay to score two passing touchdowns. Look for Palmer to connect with his twins, TO and Ocho Cinco, but the ground game with Cedric Benson could find tough sledding.

Cincinnati should have more than enough fire power to take down the Carolina team that could be one of the worst clubs in the NFL this year. Week 3 NFL Predictions Vegas-spreads.com If Palmer is clicking, this game could be a rout.

Carolina is going the wrong way after a pair of double-digit losses to open the season. Cincy's defense is underrated. Bet place to make a Bet on Cincinnati Bengals this week is at Betus.com where the NFL Point Spreads for this week is set at -3-115 with the total sitting at 37½. Plus sign up right now and receive a 100% Sign up Bonus $500 Free, to make your Week 3 NFL Predictions Bets. Check out Live Week 3 NFL Point Spreads Compare Sports Odds.