NFL Week 3 Predictions & NFL Picks: Eagles vs Jaguars Betting Odds - Let's take a look at NFL Week 3 Predictions matchup, the Philadelphia Eagles vs. Jacksonville Jaguars in a non-conference NFL Picks match-up. Vegas NFL odds have installed the Eagles at -3 Road favorites. With little history between these two teams, Jacksonville has won both NFL Picks meetings since 2002, this game doesn’t appear very attractive – except for the presence of a rogue quarterback who is making a big comeback in the NFL. 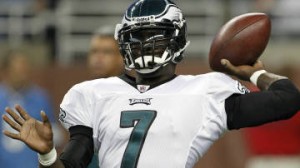 The Eagles (1-1) escaped with a narrow NFL Predictions victory over the Detroit Lions 35-32 last week on the legs and arm of Michael Vick. Named the starting quarterback, Vick is a reason to watch this game. Vick passed for 284 yards and 2 TDs while running for 37 yards. He adds a dynamic skill set that, even after his time away from the game, may be unmatched in the league. Vick has teamed-up with second-year running back LeSean McCoy to provide a spark to the Eagles’ attack. McCoy rushed for 120 yards and 3 TDs against the Lions and has quickly become a more than adequate replacement for Brian Westbrook. DeSean Jackson also was involved in the offense last week, catching 4 passes for 135 and a touchdown. Vick targeted nine different receivers last week, a testimony to his ability to spread the ball around.

A week after defeating the Denver Broncos, Jacksonville (1-1) NFL Betting Odds +3 underdogs was never in the game last week against the Chargers. The team was down 24-6 at halftime en route to a 38-13 final. The defense was torched by Philip Rivers for 334 yards and two touchdowns and the Chargers piled by 477 yards of total offense. The Jags, meanwhile, were dreadful with 6 turnovers on offense, including 4 picks thrown by David Garrard. Which team are the real Jaguars? Fans in Jacksonville have to hope the team that beat the Broncos 24-17 in week one is more of what they will get throughout the season than what they witnessed in San Diego.

Vegas-spreads.com NFL Week 2 Predictions If Vick gets loose and Garrard has another meltdown, this could be a long afternoon for the Jags. Philadelphia is known to make life miserable on opposing quarterbacks so Garrard will need to protect the ball and get the running game revved-up. He is capable but the Eagles have momentum on their side and should leave Florida with a NFL Predictions win.

Make your NFL Picks call on Week 3 of the 2010 NFL season at Betus.com this weekend and receive 100% Sign up Bonus. Vegas Lines Odds makers have listed the total Eagles vs Jaguars game 45 points. NFL Trends week 3 The Jaguars defeated the Eagles, 13-6, on the road in 2006.