South Carolina vs Auburn 2010 College Football Picks & Vegas Odds Week 4 - What does it say about your conference when a battle of the #12 team in the nation vs. the #17 team in a Week 4 College Football Picks matchup?  This game isn't even one of the top games on Saturday's card? The SEC is one tough conference, that’s the message. While all eyes will be on the battle between #10 Arkansas and #1 Alabama, the other team from the state, #17 Auburn University battles #12 South Carolina in a battle of unbeaten's. The Vegas odds & Lines makers have listed Auburn as a -3 College Football Odds favorites at home. 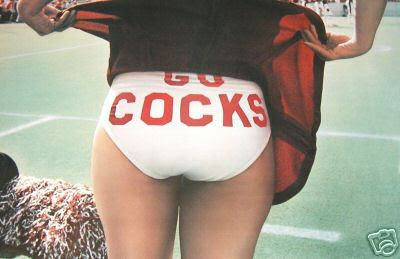 South Carolina (3-0) has beaten Southern Mississippi, 41-3, the University of Georgia, 17-6, and Forman, 38-19. The Gamecocks are led by their “big three” of quarterback Stephen Garcia, freshman running back Marcus Lattimore, and wide receiver Alshon Jeffrey. In their three College Football Picks games, South Carolina has shown a balanced attack, with only 17 yards separating their team rushing and passing yards. The team struggled at times against Furman, though, and they’ll need to bring the level up a notch if they want to stay in the ranks of the unbeaten.

In its first three NCAAF Picks games, Auburn University (3-0) has played some stiff competition, narrowly defeating Mississippi State, 17-14, and Clemson University, 27-24 in overtime. The Tigers are led by quarterback Cameron Newton, their leading passer and rusher. Newton has thrown for over 500 yards and rushed for over 300 yards with 9 total TDs. Stop Newton, then, and you’ve stopped the Tigers. Of course, they all possess two strong runners in Onterio McCalebb and freshman Michael Dyer who have over 200 yards each, but the show begins and ends with Newton.

South Carolina +3 underdogs set by the College Football Odds makers has some tough history to overcome if they want to go into Jordan-Hare Stadium and come out with a victory. The last time the Gamecocks got a College Football Picks win against Auburn was 1933 and, since, the Tigers have won 8 straight games.

Steve Spurrier will have his team pumped and, with South Carolina’s offensive weapons, should buck history, stop Newton. Vegas-spreads.com say's make a College Football Picks bet on South Carolina and Beat the Las Vegas Odds Lines as South Carolina will remainunbeaten on the year.

College Football Vegas Odds at Online Sportsbook Bodog have listed South Carolina +130 on the moneyline. Open up account and receive 30% Sign up Bonus this week Only!

Sign Up at Bodog.com for all the latest football betting odds, futures and props! Wager on the NFL spreads and totals from your home computer. How are you going to call this College Football Picks matchups? However you are going to call it make sure you Make the Call at Bodog Sportsbook this is the last week for 30% Sign up Bonus. Put some extra cash in your Sportsbook Betting account for your College Football Week 4 Picks.