College Football Picks Stanford vs Notre Dame Live Vegas Football Odds & Predictions - A top twenty team comes in for a College Football Picks matchup for Week 4 at Notre Dame on Saturday, and unfortunately for the home fans, that team is not the Fighting Irish. Stanford University (3-0) travels east during week four of the NCAA college football Picks season with an undefeated record and a #16 ranking on the line to face Notre Dame (1-2). Las Vegas odds have picked the Stanford Cardinals as -5 favorites on the road in a venue they have not emerged victorious in since 1992. 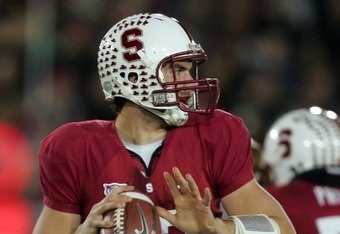 The Cardinals enter this College Football Picks game with an elite quarterback in Andrew Luck who has completed 64% of his passes and thrown for 10 touchdowns in just three games. Stanford have posted three consecutive impressive NCAAF Picks victories, including a 35-0 spanking of UCLA and a 68-24 victory over Wake Forest. The Stanford offense has been impressive behind Luck, averaging 51.7 points per game, third most in college football, while the defense has given-up just 13.7 points per game. Besides Luck, Stanford has weapons in receivers Doug Baldwin and Ryan Whalen and four runners have posted over 100 rushing yards. according to Bodog Online Sportsbook College Football Odds the total is set at 59 points.

After defeating Purdue University on opening night, Notre Dame (1-2) has suffered heart-wrenching College Football Predictions losses to Michigan and Michigan State, the latter in overtime in a game that caused the MSU coach to suffer a stroke. Statistically, Notre Dame has done well on offense. Dayne Crist has thrown for 851 yards and 7 touchdowns, Armando Allen, Jr. has provided a solid running game, and Kyle Rudolph has led Irish receivers with 21 receptions including a 95-yard touchdown catch.

This game should be a passing contest as we can see Las Vegas College Football Predictions having the total over/under of 59 points. Take the under, though, as typically in these types of games the defenses tend to stiffen some. However, with two elite quarterbacks throwing down the field, this game literally could come down to the last play of the game. Look for Stanford to buck history and win the game outright, covering the Las Vegas Point spread, with a little Luck of their own.

Vegas-spreads.com 2010 College Football Picks Week 4 Stanford vs Notre Dame UNDER the total is the right call in this spot Saturday afternoon. Earn some extra cash to bet on this College Football Predictions game when you open up a sports betting account at Betus.com today 100% Sign up Bonus.