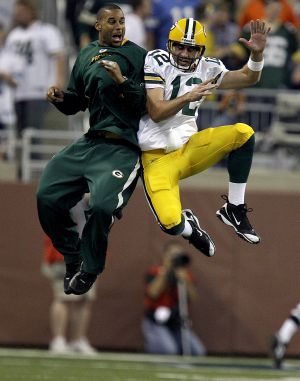 Green Bay has completely dominated this series since 2001, winning 16 of 18 games in NFC North conference games, and the closest the Lions have gotten was 17-9 in December, 2006. The domination should continue this Sunday.

The Packers defense has gotten after the quarterback with 13 sacks in 3 games. Linebacker Clay Matthews leads the team with 6 sacks and Cullen Jenkins has 3 sacks. On MNF, the Green Bay defense played well enough to get the NFL Predictions win, holding the Bears to under 300 yards of total offense, and only 77 yards rushing. Green Bay sacked Jay Cutler three times and, if not for a punt return, they might have emerged victorious. Detroit has played well at times on offense but Green Bay has enough playmakers on defense to keep the score down.

The Lions have done well at times with Sean Hill at quarterback and will need their young offensive weapons, rookie Jahvid Best and receiver Calvin Johnson to make some plays. Best followed-up a monster game against the Eagles with a low output against the Vikings, who make a living shutting down running backs. Calvin Johnson, with all his talent, has been able to find the end zone only once and his average yards per catch is mediocre.

As we take a look at NFL week 4 picks,  the Lions do not have enough weapons to hang with the Packers, and though the spread seems too large for a pro game, Detroit will have to wait another week to find a NFL Picks win.

Vegas-spreads.com NFL Week 4 Picks Green Bay Packers is the Play. The Las Vegas Odds makers have listed the total at 45 points. How are you going to make the call on this NFL week 4 picks matchup? How ever you choice make sure you make the call at best online sportsbook Bodog.com 10% Sign up Bonus.