MMA Betting - Carmouche Challenges Coenen For Womens' Welterweight Title - March Madness betting players know all too well how big of a role injuries can play in the quest for a title, and that’s some Miesha Tate found out as she was due to fight for the Strikeforce Womens’ Welterweight belt, before she injured her knee in training. Instead, it will be Liz Carmouche who steps into the ring to battle champion Marloes Coenen at Strikeforce: Feijao vs. Henderson in Columbus, Ohio, on Saturday night. 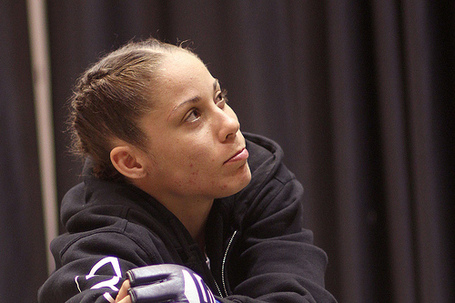 Coenen (18-4, 13 submissions) fights out of Amsterdam, and she combines a mixture of submission grapping (also known as Dutch style), Brazilian jiu-jitsu, kickboxing and Muay Thai, and she made her Strikeforce debut in November 2009, when she won with a first-round armbar on Roxanne Modafferi. Then she went three rounds with middleweight champion Cristiane “Cyborg” Santos in January 2010 before suffering a TKO loss, but she bounced back with a third-round armbar against Sarah Kaufman in October 2010. Coenen is never going to overpower anyone, but UFC betting players will tell you how dangerous submission specialists can be, and it could be argued that Coenen is the best in womens’ MMA.

Marmouche (5-0, three KOs), who was born in Japan but fights out of San Diego, just began her professional career in 2010, as she was in the United States Marines for seven years before that. She kept busy last year with five fights, winning three by knockout as well as an armbar in her first match, and she stepped up on short notice in order to take this opportunity. Marmouche uses judo, wrestling and kickboxing in her fighting style, and for what she lacks in experience, she makes up for in toughness, likely due to her stint in the Marines.

Your pay per head sportsbook had Coenen as a -180 favorite over Tate, but there are no odds out yet since Marmouche was enlisted to take Tate’s place. We’re willing to bet that Coenen will be an even bigger favorite against Marmouche as she has a wealth of experience, having been in the fight game for over 10 years. Marmouche is tough and a game fighter, but she still has a lot to learn and if she makes one mistake on the mat, Coenen will pounce all over her for a submission. Marmouche’s best chance is to go for the knockout, and she needs to do it early because as fatigue sets in, she’s more likely to make a mistake, and then Coenen will make her pay. It’ll be a tough fight and Marmouche may even come out strong in the first round, but we’re betting on Coenen to use her experience to pull out a win in your sports book. Don't miss out on more UFC Odds Betting throughout the week.